Mexico Culture and The Virgin of Guadalupe

Unilever is a British-Dutch multinational company, which is one of the world’s leading manufacturers of daily demanded consumer goods. Being established in 1930, the company currently sells its products in more than 190 countries worldwide. Unilever product assortment includes more than 400 brands (Unilever 2015). In 2014, the company’s worldwide turnover exceeded 44 billion Euros (Unilever 2015). The following paper is aimed to provide an overview of Unilever’s performance based on a precise analysis of the company’s external and internal environment. In addition, the paper will offer specific recommendations on the strategic approach to the company’s development based on the competitive overview of its performance.

PESTEL-analysis is a marketing tool designed to detect the influence of political, economic, social, technological as well as legal and environmental aspects on the company’s performance.

The political environment of Unilever’s performance is defined by the legislation of the countries it operates in. However, taking into account that the company’s headquarters are located in Amsterdam and London, it can be stated that the general performance of Unilever is defined by the legislation of the Dutch and the British political systems. However, political changes in other countries can significantly influence the company’s performance, for example, due to an increase of transportation costs caused by the occurrence of local political conflicts etc. In addition, while operating in more than 190 countries worldwide, Unilever should always monitor the legal environment of the national markets to ensure the timely response as well as appropriate adjustment of the company’s strategy to the legal changes (Unilever 2015).

The economic environment influences Unilever’s performance through the prism of the disposable income available for the customers as well as the rate of the household consumption (Rankin 2014). The economic recessions can force the customers to save, decreasing the spending onto the goods offered by Unilever (Headey & Fan 2008).

Social factors influence the company’s performance through general wealth of the nations as well as life expectancy. For example, the modern Europe is characterized by ageing of the population (Blossfeld, Buchholz & Kurz 2011). Thus, the business is mostly oriented on offering the goods for adults rather than youth. In addition, social factors contribute to the popularity of specific tendencies (Maestas & Zissimopoulos 2010). For example, public campaigns caused an increase in the demand for healthy products, which are produced in accordance with the ecological principles as well as the principles of the local communities (Hyman et al. 2012).

The increased role of technology and social media pushes Unilever to use the Internet technologies and advertising strategies to reach the customers (Ahlgren, Gustafsson & Hall 2004). For example, the company assures the customers’ feedback through the official pages on Facebook, Twitter etc. Such platforms are also used to engage the new customers, increase the brand awareness as well as the sales.

The environmental safety is supposed to be the key issue in the performance of modern businesses. Unilever strives to consume fewer resources to produce less waste as well as to assure the environmental friendly manufacture (Ellerman, Convery & De Perthuis 2010). Unilever actively seeks opportunities to minimize the hazardous impact on the environment and preserve the healthy planet (Greenpeace 2001). The company is planning to become ‘carbon positive’ in its operations till 2030.

Based on Porter’s 5 forces analysis, the global performance of Unilever can be represented through the following scheme:

Competitive rivalry: the industry of Unilever’s performance is characterized by a tough competition. The key competitive players include P&G Company, Reckitt Benckiser Group Plc., and Nestle, while P&G has larger resources at their disposal.

The bargaining power of Unilever’s customers is quite limited due to the company’s retail pricing strategy (Unilever 2015).

Threat of new entrants: when launching any product or brand, the company carefully checks the market for the existence of similar products within the portfolio of the competitors as well as in accordance with the demands of the customers.

Bargaining power of suppliers: Unilever is characterized by a consistent strategy concerning local and international suppliers, which is based on the implementation of the company’s corporate and social responsibility values (Unilever 2015).

The opportunities of Unilever include the following:

– The unsaturation of the market. The success of Unilever’s performance is characterized by the flexibility of the market, which provides the opportunities for further growth and development.

– The existence of the new markets provides the company with the opportunity for successful expansion based on the achievements in the research and development as well as the continuous development of the new product lines accustomed to the needs of the local markets.

The threats for further development of Unilever include the following:

– The extremely competitive market. The role of competitors within the operated industries is quite high. Some of them use a variety of informal import channels, reducing the competitiveness of the prices offered by Unilever.

The essence of Unilever’s value chain is based on the corporate social responsibility policy. It fact, it implies treatment of employees as the key company’s value. In fact, CSR is an integral part of all the activities of business performance (Unilever 2015). The other values of Unilever include integrity, dignity, loyalty to employees, customers and suppliers as well as treating them with respect and honor. Innovation is supposed to be the core of the company’s performance value chain as it helps to completely satisfy the needs and demands of the customers. A variety of the R&D centers is placed worldwide to assure the usage of the latest technologies in the product manufacturing.

The SWOT-analysis of internal environment refers to the overview of Unilever’s strengths and weaknesses.

The strengths of Unilever include the following:

– Worldwide popularity of the company’s brands. The performance in 190 countries all over the globe created a positive image for the company as well as increased brand awareness among the target audience.

– A wide range of goods. A broad assortment of brands and a diversified product range help Unilever to gain customers’ attention and completely satisfy their needs and demands (Jones 2002).

– Strict quality control at all stages of production and distribution. This helps the company to propose the competitive and high quality products for the daily needs of the customers (Jones 2005).

– Innovativeness. The broad network of the Research and Development centers assures the production and development of innovative products and technologies to satisfy the most demanding consumers’ preferences.

– A well-developed distribution system based on the combination of the global thinking with local execution.

The weaknesses of Unilever include the following:

– A broad range of the owned brands and products. The abovementioned diversity can prevent from proper focusing on the market changes.

– Higher prices for goods compared to the prices offered by the competitors. In fact, the majority of the offered prices are explained by the broad research and development activities as well as wide advertising.

– The variety of multinational brands cannot efficiently satisfy the needs of the local markets.

Value: the internal resources of Unilever as well as the loyalty of the customers are supposed to be the key elements in retaining the highest rate of the company’s value (Unilever 2015).

Rarity: the global strategy of the company’s uniqueness in the market is controlled by the chain of directors as well as their representatives within the local divisions.

Imitability: Unilever strategy implies the usage of the external opportunities to neutralize any threats that occur in the process of the company’s performance.

Organization: Unilever is able to exploit its internal resource to capture value as well as increase the efficiency of the company’s performance (Unilever 2015).

Figure 1 proves that despite a slight decrease of Unilever stock price for 2,02%, the value per share remains quite high, i.e. $43,74. Taking into account the abovementioned numbers as well as indexes shown in figure 1, it can be stated that Unilever’s performance is efficient and profitable. 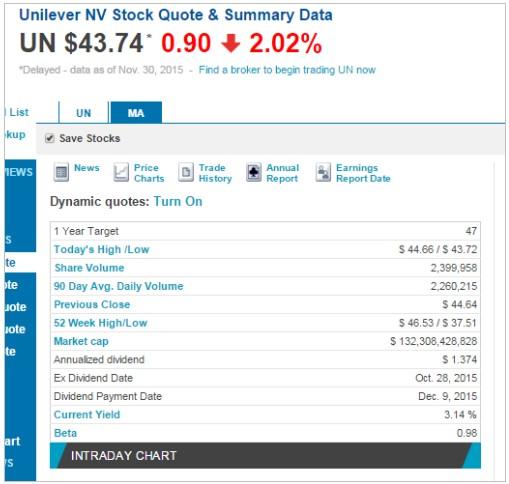 Every day, more than 2 billion people in more than 190 countries use the products offered by Unilever. This makes the company the third largest producer of consumer goods in the world. In 2010, the company set a goal to double its revenues within the next 10 years, while avoiding the doubling of the costs (Unilever 2015). The information management plays a key role in this ambitious strategy. Thus, to help employees make right decisions, the company decided to use data analysis of all business processes within the company.

The corporate strategy of Unilever states that successful performance requires the highest standards of corporate behavior towards each person, society, and the environment. It means that honest approach to business, respect for people and suppliers as well as care for the environment are supposed to be the key values of Unilever’s corporate responsibility strategy. The key goal of the company is the improvement of life of the modern society through the company’s brands, commercial operations and relationships as well as voluntary contributions and donations (Sterling 2008). Unilever is constantly optimizing its impact on the environment and making efforts to achieve long-term sustainable business development. The company is committed to the establishment of the mutually beneficial relationships with their suppliers, customers, and business partners (Unilever 2015). Unilever appreciates the commitment of its partners and suppliers to the principles, values and standards of the sustainable business conduct.

The key challenges faced by Unilever are closely related to the opportunities, threats and weaknesses provided in the SWOT-analysis above. To assure an efficient performance, the company should be able to turn the possible opportunities into strengths, overcoming the hazardous effects of the weaknesses and potential threats. The key challenges imply the implementation of a strategic approach to ensure the focus of the company on the ongoing market changes (Sashi 2012). The company should revise its pricing strategy to ensure the coverage of all segments. The unsaturated market is supposed to be the key opportunity for further growth and development of the company (Thain & Bradley 2014). However, the expansion onto the emerging markets is supposed to be quite challenging for Unilever due to the middle segment price oriented policy, which can be quite expensive for the developing markets. Nevertheless, the technological achievements as well as innovativeness based on the broad network of R&D centers can serve as the competitive advantage of the company.

The Selection of Strategic Options

Based on the research conducted above, Unilever is recommended to reorganize the company’s portfolio as it can distract from the most important products and brands. At the moment, the company possesses more than 400 brands, while the key focus includes 14 of them (Putsis & Bayus 2001). Thus, it is recommended to destroy the brands with the low rate of profitability. Such actions will help the company to be more focused on the satisfaction of the most actual demands of the customers. The current variety of multinational brands can not efficiently satisfy the needs of the local markets. Thus, the company should pay more attention to the products’ adaptation to the local markets. In addition, Unilever is recommended to reconsider the advertising costs, making their distribution more efficient through investments in the most popular advertising channels (Rushton 2011). The company should pay attention to the efficiency of the advertising policy, the key goal of which implies business promotion as well as the attraction of additional investments, increasing thereby the revenues and financial capacity of Unilever.

Unilever is characterized by an aggressive marketing strategy with the limited bargaining power of the buyers. The key recommendation for the company’s further development implies the destruction of the brands with a low rate of profitability.

Not Made in America