Hamilton An American Musical vs. The Tragedy of Hamlet Prince of Denmark

Lord Curzon was appointed the Viceroy of India in January 1899. He succeeded Lord Elgin. Lord Curzon had two consecutive terms to preside over the Indian empire and was expected to serve the British Empire as its paternalist figure. His notable achievement as the Viceroy of India was the creation of Eastern Bengal and Assam. However, he later had an altercation with Lord Kitchener over the organization of the Indian army. The disagreement contributed to his departure from India. Nevertheless, Lord Curzon’s illustrious career as the Viceroy of India in 1899-1905 had a significant influence on his time as Foreign Secretary. The paper will answer the question why it was Lord Curzon who took the opportunity to display the British power and remind rulers of the treaties that had tied them to Great Britain.

It was Lord Curzon who took the opportunity to demonstrate the British power because he had to and could show that he was capable of taking charge of the Foreign Office when the Foreign Secretary, Arthur Balfour, was away. It could not have been done by somebody else apart from Lord Curzon because he had gained expertise in Asian affairs. The expertise was a big influence in his time as Foreign Secretary. Besides, he was a veteran of the ‘Great Game’ that involved rivalry between the Russian Empire and the British Empire. In addition, since his time as the viceroy of India, Lord Curzon had urged an assertive British stance, and it gave him the incentive to exploit the post-war diplomatic environment. Lord Curzon also reminded the rulers of some of the long-standing treaties that had tied them to Great Britain. An example of such treaties is the Anglo-Persian agreement. The pact pertained to the assertion of the Iranian national interest as well as the imperial ambitions of the British government. The Anglo-Persian agreement was the brainchild of Lord Curzon. According to Lord Curzon, Persia and the waters of the Persia Gulf were important borderlands that deserved protection from the policies that were being imposed by czarist Russia. Lord Curzon was so important that his tour to the Persian region was a critical step in locating the Gulf within the Britain’s Indian empire. Another thing that partly contributed to the location of the Gulf was the inclusion of its members in the Alqabnamah. An extract from the 1935 edition of the Alqabnamah is shown below. 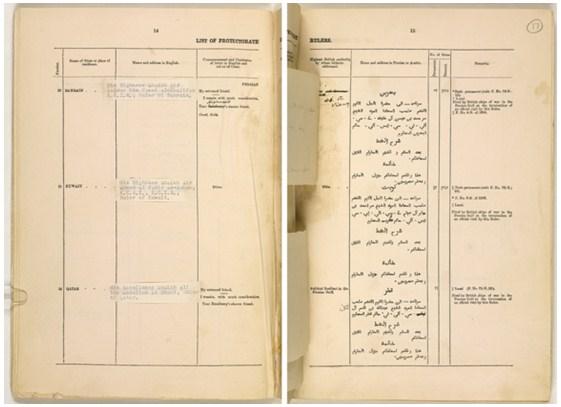 Lord Curzon was also making efforts to press for a protectorate over Kuwait. He pressured the British government not to surrender to the Russian attempts of securing a port in the Russian Gulf. Lord Curzon was convinced that economic interdependence between Russia and Central Asia would be detrimental to British interests. It is also important to acknowledge that Lord Curzon had deep mistrust toward Russian intentions, which compelled him to encourage British trade in Persia. In fact, he was advocating for an exclusive British presence in the Gulf. Lord Curzon achieved this by giving his government some incentives that would establish Britain as the protector of Kuwait. It was encapsulated in the Anglo-Kuwaiti Agreement of 1899. It also seems like Lord Curzon wanted to show that he could still be efficient without the support of Lloyd George, who was the Prime Minister.

It was Lord Curzon who took the opportunity to parade the British power because he was capable of chairing the Mesopotamian Administration Committee, which would oversee the British attempts to instigate permanent influence even after the invasion of Mesopotamia. In addition, he was a scholar, a politician, and an imperial administrator. In this regard, displaying British power would show his proficiency in handling key operations of the state. Moreover, Lord Curzon was also knowledgeable as he had achieved academic distinction at Eton and Balliol College. Furthermore, he had served as a conservative member and sat in the House of Commons. In fact, it partly played a role in instilling the beliefs of civilizing virtues of the British Empire. With his knowledge, it was easier to divide the British Mandate of Palestine to create a kingdom of Jordan. Lord Curzon also had unparalleled knowledge of India and its environs. After all, the high offices in the British political and imperial structure were held by people with powerful educational connections, and Lord Curzon was not an exception. Therefore, he was among the most influential people in the region. In fact, in his tenure as the Viceroy of Britain’s Indian Empire, he held an ostentatious ceremony that was attended by all the rulers of the Trucial Coast. The ceremony was done aboard the Argonaut and is shown in the figure below.

The ritual performed in the ceremony symbolized royal incorporation and was first done by the British.

Another reason why Lord Curzon wanted to flaunt the British power and remind rulers of the long-standing treaties was his diplomatic skills and force of personality. In fact, it explains why Lord Curzon dominated the eleven weeks of the proceedings in the conference of Lausanne. It is where he was dealing with Italy and France and managed to restore Turkish sovereignty. The Treaty of Lausanne was among the most successful post-war agreements, which also depicts Lord Curzon’s diplomacy skills. The objective of the conference was to negotiate a pact that would replace the Treaty of Sevres, which was no longer recognized by the Turkish government. Lord Curzon coordinated and dominated the conference. Similarly, in January 1920, Lord Curzon was insisting on the British troops to remain in Batum. It was contrary to the wishes of the Prime Minister. In fact, Wilson had at some point convinced the Cabinet to allow the withdrawal of military troops even though Lord Curzon later reversed the decision. It shows how he exercised his diplomatic skills regardless of the choices or preferences of his associates and fellow politicians. Those skills also helped him negotiate with France when the French Troops were enforcing German reparations payment. His ambitions were always expansive. Lord Curzon envisioned bringing Iran under the British Colonial Umbrella. The vision would be a major achievement because the policy had not been genuinely pursued in the previous years, partly because Anglo-Russian Entente deterred Russia from the pursuit of foreign policy.

Lord Curzon also had a desire for public attention, which is why he was best suited for the position of a British administrator in charge of the Indian empire. Also, he had a solid background in the matters of public policy because he had stayed in India for about seven years where he made strong appeals pertinent to the public policy. The other aspect that shows his desire for public attention was his disappointment after failing to be elected as the Prime Minister. His dismay was so great that he referred to Baldwin as a man of utmost insignificance. In this regard, he felt he had been deprived a platform to flaunt his desire to serve the public. Lord Curzon also took the opportunity to showcase British power because he would exercise his humanity given the prevailing predicament where the British bourgeois were press attacking Soviet Russia. In fact, his humanity was evident when he declared the British Government to be accountable for the Archangel adventure. In this regard, it is imperative to acknowledge that the process of state building in Japan was linked to the emergence of imperial power whereas India was its important colony. That is why India was governed by the British personnel.

One more reason why Lord Curzon took the opportunity to display the British powers and remind rulers of the existing treaties was his ability to exhibit communalism just like he did as the Viceroy of India. It was done specifically through the Bengal partition as it showed how Lord Curzon aimed at introducing communalism in the name of administration. He clearly valued the importance of the divide and rule theory, which was embraced in counteracting nationalism. Similarly, within India, Lord Curzon undertook the initiative of instigating several commissions to inquire aspects such as education, irrigation, as well as other branches of administration. He was also responsible for restoring the Taj Mahal. Lord Curzon remained to be the Foreign Secretary until January 1924. In fact, when Stanley Baldwin was going through the process of forming a new government, he appointed Curzon as Lord President of the Council. The appointment took place in November 1924.

Lord Curzon was a British Conservative Statesman who had also served as a Foreign Secretary as well as the Viceroy of India. He was an efficient administrator whose reforms and accomplishments left a permanent mark in world’s history. The example is the Lausanne Conference where he dominated by securing British demands from Turkey. Similarly, the Lausanne conference eventually recognized the sovereignty of the Republic of Turkey. Lord Curzon took the opportunity to flaunt the British power as he wanted to prove he was capable of handling the Foreign Office in the absence of Lloyd George and Lord Balfour. His strategy was successful because he eventually became Balfour’s successor. Moreover, Lord Curzon wanted to exercise his diplomatic skills as well as demonstrate the force of own personality. His efforts were fruitful because he was able to successfully control the conference of Lausanne for eleven weeks. Lord Curzon also deserves credit for strengthening the British standing in Persia, which was among his key achievements.

Church Review, A Northern Phase of a Southern Problem Analysis