Mexico Culture and The Virgin of Guadalupe

Art is a language without words. Artists of the different art styles use various tricks and techniques in their works of art to express their feelings and worldview. The Renaissance is one of the most significant art periods in the cultural development of Europe. The portrait of Doge Loredan is one of the best examples of the Venetian style of portraiture. However, at the first glance at Bellini’s portrait of the Doge, many people might get an impression that this piece of art looks like any other painting of a man. The goal of this research paper is to analyze the portrait “Doge Loredan” by Giovanni Bellini and demonstrate what characteristics and inner qualities of the sitter Bellini wanted to show. For this purpose, this paper will also provide a brief overview of the era the artst lived in and the art techniques he used.

The Era of Renaissance

Giovanni Bellini was one of some brilliant painters who had created the lyrical Venetian painting style. This style combines pagan subject matter, sensual use of colors, and paint surface, and passion for an extravagant environment. Bellini was born in 1430, in Venice, Italy. During this period, Venice was a great trading empire due to its location at the crossroads of Europe. This fact played its role in the development of a new era in the cultural growth of Venice, called the Renaissance. This era shaped against a background of the discovery of new continents, scientific discoveries, the growth of commerce, and the invention of printing and paper (“Renaissance: European history”). The Renaissance can be literally called “the rebirth” of the European civilization after a long period of cultural decay. It is characterized by increasing the interest in Classical scholarship and values. Art was seen as a part of knowledge that had rights and abilities to provide humankind with images of God (“Renaissance: European history”). It became a way of describing God’s creations and their place in the universe. Art was based on the perception of the visible world. It was expanded according to perspective, harmony, and mathematical principles of balance.

Giovanni Bellini was born into a family of painters. He had an older brother by the name Gentile. Both brothers got their first art education from their father Jacopo Bellini, who was considered to be the one of the creators of Renaissance painting in Venice. Giovanni grew up to be a devout Christian man, which had a significant impact on his work. His early works in the 1450s include such paintings as “Dead Christ Supported by Two Angel” and “Dead Christ Supported by Mary and Saint John Evangelista”. For both paintings, the artist had used tempera. It is a type of fast-drying paint that consists of a pigment and raw eggs as a binder material. During this period, Giovanni’s works were influenced by his brother-in-law, Mantegna (Batschmann, 41). They became more perspective in a sculptural way as it is most noticeable in his painting “Agony in the Garden”.

The artist’s middle years are characterized by the significant change in painting surroundings and objects. With great enthusiasm, he started using the newly introduced oil painting style instead of the old tempera that he had used before for painting the religious scenes. Giovanni adopted this technique from the Sicilian painter Antonello da Messina, who was considered to be involved in spreading oil paints throughout Venice. The use of oil painting style filled the paintings with depth, gave extra sophistication, through rich, vivid, and freely flowing colors. The new style helped the artist to refine his talent and made his works brighter and detailed, turning him into a famous artist. Bellini also started using his skills in cathedrals and palaces of Venice.

Giovanni Bellini used a special technique called ‘impasto’ to paint the portrait of Doge Loredan. This technique is characterized by spreading the thick layer of paint on a canvas, which adds the volume to a painting. The greenish background of a portrait and the impasto technique created an illusion of the three-dimensional image and made the beautiful contrast.

Analyis of the Portrait “Doge Loredan”

Leonardo Loredan became the Doge of Venice in 1501, and he had held this position for twenty years. His portrait was painted in 1501 to celebrate this elderly nobleman’s election as a ceremonial head of the Most Serene Republic of Venice. This work of art is considered to be one of the first frontal portraits of a reigning Doge. During the Middle Ages, men were portrayed only from one side. This way of painting can be explained by the left-right symbolism (Lloyd 56-66). According to this symbolism, the right side shows the way to divine things and the left side represents the way to worldly things. 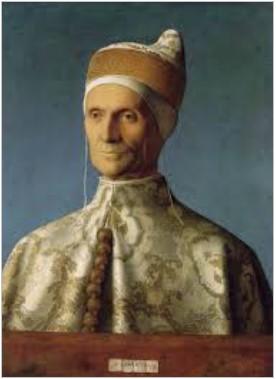 Giovanni Bellini usually painted the sitter’s shoulders and head from the front, and the body and head turned slightly to the sitter’s right with the coming from the right side. The expression on the right side of the face looks different to the left side. It seems stern, and the shadowed left side looks gentle. This effect can be explained partially by the artist’s manipulation of the Doge’s peculiarity, and partially by the painter’s use of light. The sitter’s right eyebrow is contrast and intense, and the upper lid is raised well to clear the pupil. The eyes are very widely spaced. Above his left eye, the eyebrow looks natural and more relaxed. The pupil is more shadowed that the right one. The upper lid of the left eye partly closes the pupil, and the corner of the left eye is raised. The wrinkles running from the cheeks towards the corners of the mouth seem different. The right side looks straight and gives a stern impression. The left side line is curved, which makes the left side of the face more relaxed. It creates an effect of a slight smile.

The strings of the Doge’s hat hang untidily when the rest of his cloth is impeccably ordered. The string on the right side is straight, vertical, and lit, while the string on the left side is in shadow and it falls away from the vertical string. Such a difference of the strings underlines the contrast between two sides of the face. This facial asymmetry is a formal device, making the sitter look alive. The diversity in the portrait also reflects a balance of power and concession.

From the left-right symbolism perspective (Lloyd 56-66), the bright right side of Doge’s face signifies his religious status. It is his straightforward and unshakable side. The left side, which is more shadowed and smiling, represents patience, kindness, and sense of humor during tribulation.

In the portrait of Doge Loredan, Giovanni Bellini successfully managed to capture the sitter’s position in life and a piece of his personality. The responsibility of being the head of both the church and the state is clearly reflected on the Doge’s face. Loredan’s steely gaze seems to tell that the Doge is a wise and powerful leader of Venice (Hall 147). The clothes of Doge Loredan represent his status, authority, and his obligation to uphold the Venetian Republic. He is wearing a mantle of state, a hat, and ornate buttons. The hat is called a ‘corno’ and it comes from the hood of a doublet, which is the traditional hat of the Venetian Doges. He wears it over a linen cap, which strings cascade from the Doge’s head to his shoulders. His mantle is fastened with a vertical cluster of spherical buttons. They are typical for a Doge’s clothes and called ‘companoni’. Outside of the frame of this painting, the Doge would have on the long-sleeved robe, which is called ‘vesta’ with the ornate cape over it.

The ornament on his mantle has the symbolic pomegranate that is woven with the silver and gold fibers. Pomegranates were widely used in both religious and secular connotations as a symbol. The pomegranate has a ring of spikes around the top, which looks like a crown. It symbolizes a crown of the head of the country or Jesus Christ’s crown of thorns. The fruit is also a symbol of fertility and revival. The silver and gold fibers of his mantle and corno represent light and wealth of Venice.

It takes great talent and effort to create a beautiful painting, but it requires even more of skills, talent, and hard work to make a person on a portrait look alive. Giovanni Bellini was a brilliant artist who had managed to breathe life into the portrait of Doge Loredan. Moreover, the artist was able to reflect the character and the challenge of the Doge’s status on a canvas by using the light, colors, and impasto technique. The detailed analysis of the portrait gave the opportunity to see the Doge’s inner qualities such as kindness and sense of humor. Understanding of the techniques and symbolism that artists use in their works plays a significant role for viewers in comprehension of the language of art and the worldview of artists.

Othello’s Jealousy and its Description by W. Shakespeare

Does the Hebrew Bilble Prohibit Art?